A New Kitchen at House of Simple 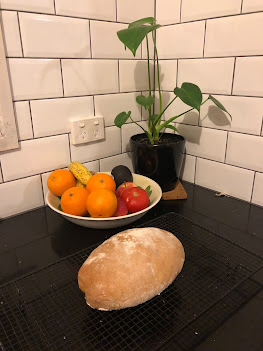 So the kitchen in our 43 year old home was the original. Think 1978 faux laminate pine cupboard doors with an apple green laminate bench top – clearly all the rage in ’78. The underlying chipboard was swollen and rotting with 42 years of absorbed moisture (cockroach heaven), the benchtops had clear evidence of hot pot burn marks, food colour staining, sun fading and oh-so-scratched. The layout was truly atrocious including a pantry in which only half the shelves were accessible and four corner cupboards that required me to roll myself up like a hedgehog to reach whatever was up in the back corner. The only saving grace was that it had running water and a sink that did not leak too much.

We lived with this for over 2 years whilst we researched and saved for a new kitchen. We ended up deciding on a self-install modular kitchen that we could buy flat packed from our large local hardware (Bunnings in Australia). It was to be simple and functional with a free-standing island bench on wheels from IKEA. We were just about to pull the trigger on this (in fact we had already purchased the new cooker and range hood) when my work colleague Rechelle told me that I really should ring the kitchen company her husband worked for – just for a second opinion. We shrugged our shoulders and thought why not?  It wouldn’t hurt. We’d made our decision anyway ….. so we were unlikely to change our mind. Wrong. So wrong.

The owner, Brian, came around within 48 hours to give us his thoughts on our kitchen design.  My colleague had warned me that Brain was a straight shooter but knew his stuff when it came to kitchens as he had been doing kitchens for decades. To cut a long story short, in 15 minutes flat Brian had relegated all our 2 years’ worth of plans and research to the trash and had come up with a new design for the kitchen!

There were some classic one-liners of Brian’s that will stay with me for a very long time e.g. “That’s a terrible idea, how long have you been using a kitchen for?!” and “You’re not getting any younger, you’ll be thankful for a wall oven so you don’t have to bend” and “There’s not enough room for an island – at your age you’ll break a hip banging into it” and “I’m not doing cupboards, it going to be all draws – you’re too old to be fossicking on your hands and knees in the back of a cupboard” and “A deep pantry is a stupid idea. I’m doing you a slightly shallower wider pantry so nothing gets lost” and “No, you want nice wide handles. Your arthritis will thank me one day” and “Black cupboards will show every single finger mark so I’m not selling you that”.  What a legend!

After a minute of M and I putting our egos back in their box, we had to admit that what Brain had designed for us was far superior to anything we had planned.  In essence, for an extra 20% additional cost to our budget, Brian had given us 50% more kitchen with far better quality hardware and fittings, a large stockpile pantry and a stone benchtop and also lined us up with a plumber, electrician, installer and stonemason.

The lesson here is that sometimes, just sometimes, it is worth paying a bit more.  Now don’t get me wrong, I’m still as tight as a new jam jar lid, but I could easily see the value in scrapping our DIY plans and going with Brian’s design.  I’m also very glad I listened to my colleague Rechelle and made that call too.

Better still, Brain had the kitchen built and installed in time for Christmas 2020 and we did not have to lift a single finger – pretty darned good I say.

We still have to paint the windows, remove the old exterior canvas shutters on the eastern window, install simple roller blinds, sand and stain the wood floorboards and install the new range hood before we can say that it is 100% finished – but hey, what’s life without the ever-present to-do list?

Enjoy the pictures. I make no excuses for the lived-in look of the new kitchen – it’s a working kitchen, not a show piece. It feeds a lot of people every day.

P.S. Predictably, the microwave blew up yesterday, so the space above the oven will soon have a new black microwave.