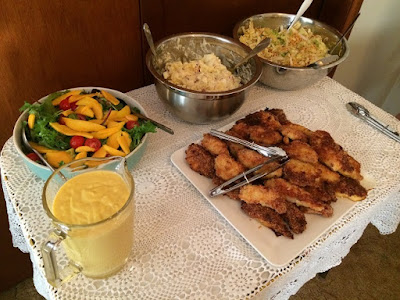 Whoosh!  Did you hear that? That was the sound of six weeks flying past since I have written here – gosh.

Plenty has been going on here at our place, so grab a quick cuppa and I’ll fill you in.

We have an old shade cloth covered gazebo area outside the back door which was pretty wasted space, so we decided to get the beams checked out and then cover it in tinted sheeting. This allows us to eat outside in all weather and gives us an alternate living area to relax in too. We employed a retired builder to do the job as he needed the work – we like our money-spend going to individuals who will appreciate it rather than to some soulless corporation. He was grateful for the work and we were happy with the end result and the reasonable price.

Now to decide on what colour to paint the old beams .... hmmm. Duck-egg blue or maybe gun-metal grey?

We have been cooking up quite a few meals to freeze in advance. There is curried vegetables, thick beef stew, satay chicken and savoury mince happening. This is such a savings in time, effort, electricity and is pure convenience especially as we are still both working full time outside the home. We simply pull one of the frozen family meals out of the freezer to defrost before we leave for work and just heat it up later that evening. A fraction of the cost of pre-packaged meals with the same level of convenience and probably better nutrition too.

We have also been shopping at local farmers markets on a Saturday more often, again because we like our money-spend going to individuals who will value it rather than always going to some soulless corporation, not because it is any cheaper per se.


Our household has shrunk since late last year as a couple of the girls have now moved out into their own places now. It has been such fun helping set up ‘home’ with them. I can remember the fun it was when Mrs HM and I set up our first little house. I am happy that they are content with bargain finds off Gumtree as well as using some of our surplus stuff too. It is also fun hearing them talk about their budgets, meal plans and future plans. Ha ha – we are now accidentally over-catering when we cook with only five of us at home now to feed. Force of habit. Oh well, there is always lots left over for lunches for the next day or two.

We went to the local caravan and camping show recently to start our hunt for a ‘nice’ caravan…..
Oh. My. Goodness. The sheer price of new caravans these days was a total shock for me. Big, big dollars. Some were the price of a house deposit in a capital city! We just could not see the true value and we came back to earth with a bump. We just wanted a smaller van to initially use across the next 10 years or so (whilst we are still working in some capacity) so we can go away regularly on local intrastate mini-breaks. We both agreed that we simply could not justify the cost and we believed that spending all that money on a caravan would not bring us any more joy or contentment than some other alternative. So, long story short, we ended up buying a camper trailer for a tiny fraction of the cost of the fancy units we saw at the caravan show. Now, historically speaking, I do not enjoy camping, yet Mrs HM loves it. However, Mrs HM showed me that the parts of camping which I hated were really just the unpacking and pack up of huge old tents and lots of paraphernalia that we always took when the children were little – that is now all a thing of the past. So I saw the logic and am now looking forward to the delivery of our camper trailer in about a fortnight. The camper trailer allows us to organise our stuff in boxes in an orderly manner in the base of the trailer and leaves our bed made up with the entire camper folding up in a matter of seconds on top of all that. Additionally it has a neat little slide out kitchen, battery operated LED lighting, trailer battery charging whilst the car is running, Velcro removable walls, water tank attached to the kitchen and a fully insulated ceiling.  We should have some real fun in this – just the two of us. We had a towbar put on the Kia Rio (Persephone) as the gross weight of the camper trailer even when laden is well within the capacity of our little car. I am very pleased with this arrangement.

We will do some posts of our mini holidays. We will have fun doing frugal meals and frugal trips and sharing these with you all.