The Slaying of Sir Sword Fern 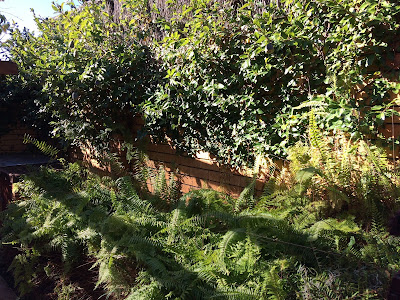 We have started attacking the garden at the new place.  The poor old garden is fully overgrown and in poor condition after 40 years of minimal attention. We have our work cut out, that's for sure.  The pictures today will give you a bit of an idea.

As we live in a temperate zone on the east coast of Australia, all the weeds and sword ferns grow rapidly even in very poor soil.

Some of the HM daughters are really getting stuck into the garden today which is great to see.  I am feeding off their energy.

I also have questions and a need for some suggestions and opinions please folks.

1. Sword fern - it is literally everywhere as you can see. How hard it is to banish or do those pesky rhizomes just keep rendering this fern immortal?

2. I am attempting to compost absolutely everything except for the virulent climbing fig that is infesting nearly every fence line. I need to have copious amounts of compost as the ground on this property is very depleted after 40 years of nearly zero care. Any thoughts, ideas or warnings on attempting this type of composting? I'm even seriously thinking of buying a mulcher.

3. The lawn is a total mess .... a veritable museum of every type of suburban weed ever known to mankind really. I am not a lawn fanatic, but it is nice to have some half decent turf I suppose. Any success stories for hard-wearing lawn types out there?

4. The area down the side of the house (where the old bush house is) gets plenty of sun from spring right through to autumn but unfortunately it is full shade during winter - ideas?

There is copious amounts of old weed matting underneath all the weeds (!!) which will be a big job to remove.  I think I am just going to have to just tackled bits at a time.

As the soil is so depleted, we are going to eventually created no-dig gardens on top of the existing old soil.  Over a period of 5 years this should eventually revitalise our tired soil. We intend to use Morag Gamble's upside-down no dig garden method.

We will eventually introduce a few hens, which, besides eggs are mainly useful as a source of fertiliser. Our little rabbit (Pan) produces a surprising amount if rabbit poo for one small creature and it is jolly good stuff on the garden too (who knew?).

I really want to do this garden frugally by composting everything, saving seeds, using cuttings, using weed tea, having worm towers and employing all the things I have learned over the years in one property.

I really hope you will be able to see the transformation as I do the odd update post on the garden over the next few years (looks like I will be continuing to blog then!!). Today's pictures show it at its worst.  It will be fun to show you the updates as they occur.

Off to try and wash climbing fig sap residue off my hands now as it is burning and itching.