Having enough - this is one of my core values.

It was a core value that remained hidden for decades under piles of 'stuff' both physical and emotional and has only been emerging over the last few years as a core value.

True, not having enough can be worrying but also having too much is just as much of a worry as is working our be-hinds off to try and accumulate too much (tips hat to consumerism).

For so long I was a human having instead of a human being. Essentially I now believe that mindful contentment is at the core of knowing that I have enough.

Strange things that make me feel poor are: 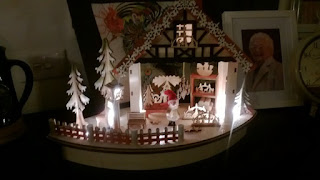 As I write this post, my girls are all making chocolate truffles in the kitchen with John Denver turned up loud and them all singing along...."country roooooooooad, take me hooooooome...".  There's laughter, chatter, choruses sung in harmony, aprons unfurled and the inevitable "taste this Dad" - I am truly blessed.

An inner voice lets me know that I am enough.