I am just wiping my hands and licking the spatula....I have just finished whipping up a batch of homemade ice cream using Sally at Jembella Farm's recipe HERE . The mix pretty nearly did not make it into the freezer!  I can hardly wait until it is frozen (Mr HM does a little involuntary skip in excited anticipation!).


Well, the tomatoes growing in my self-watering veggie boxes are ripening quickly. We had fried eggs and tomatoes for breakfast this morning.  It is very satisfying eating a meal that is 100% grown from the back yard. Uh huh.

The eggplants are really getting a go-along and there are plenty of little fruit beginning to form.  The pumpkin vine is spreading its influence all over the back air-conditioner units, and in other news, June the hen is STILL clucky...(I have given up try to break the cluckiness - June the hen 54, Mr HM 0)....and thus we are mercifully down to five or six eggs a day production instead of seven. This seven-eggs-a-day racket is a real eating commitment - lots get given away.

It rained heavily all night long and now that the sun is out it is getting very steamy...the humidity is rising very quickly.  This of course means a few things: my sun-dried washing will not be quite 100% dry when I bring it in, cotton shirts will be a preference in a bid to combat the humidity, fans will now stay on to leverage the cooling effect of high humidity air movement, dewy mornings,  a change to summer bed sheets and covers, the bathroom will need continual airing, being on a vigilant look-out for internal mould will now be necessary for the next 6 months....and my energy levels will plummet - such are the inherent effects of muggy humid weather and living in a rain belt.

Christmas is galloping toward us like a wild brumby on oats. We are doing Secret Santa this year and have used an app to secretly allocate who has who.  Lists have been made, money has been saved and  allocated and we are 100% on track.  There is still plenty of pencil-chewing being done regarding Christmas food however....our problem is we always over-cater, and whilst this is great in that we eat left-overs for a week or more....ham, pavlova and coleslaw can get pretty dang boring when it is still repeatedly happening well into mid January!   We will just have to invite less people or use a smaller table so it looks fuller me thinks. 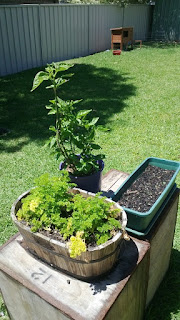 I have been buzzing around all morning 'achieving' things, so have now decided to just stop and kick back.  I got up early and have done 6 loads of washing, folded and put away 5 loads, cooked breakfast from scratch, collected eggs, watered the gardens, had a fight with June the hen (I lost again), tidied the laundry, took all the sharp edges off the new batch of soaps, vacuumed, swept, picked strawberries, picked tomatoes, dusted, did three loads of dishes. The nice thing about domestic chores compared to being a senior manager (my day job) is that domestic chores do not answer back, do not bust into tears, do not move goal posts, do not gossip, do not say one thing and mean another, are not political, do not waste tax payers money, do not indulge in one-up-man-ship.....domestic chores can be quietly just started and finished - as simple as that. Satisfying.


Oh - just remembered I need to fix the back door - I'll do that first then I'll stop. Promise.